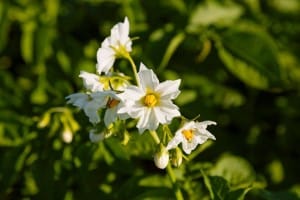 Belonging to the Solanaceae family, its scientific name is Solanum tuberosum.

“It is a herbaceous, vivacious, and dicotyledonous plant, that has an aboveground and underground rhizome structure from which the tubers originate and grow.”

They are thin, long, fibrous, and very branched out. They are not capable of penetrating harder soil very easily and often only achieve full development in softer, less compact soils.

They are aerial, thick, strong and angular. At first they stand up straight, but with time grow down towards the soil. The stems originate in the skin of the tuber, varying between 0.5 and 1 meter in height. They are greenish brown due to pigments related to chlorophyll present in the whole stem.

They are the edible parts of the potato plant. 5 to 10 tubers are usually produced per plant. Our bitter variety is characterized by its high content of dry matter, its yellow colour, and delightful flavour. Nowadays it is one of the varieties most suitable for frying, allowing us to make our famous potatoes chips.

They are composed of primary, secondary and interlayer leaflets. The nervous system of the leaves is reticulated in a grid-pattern, with most nerves situated in the middle of the leaf and its edges.

FROM THE LAND TO THE SACKS

Do you want to distribute our products?